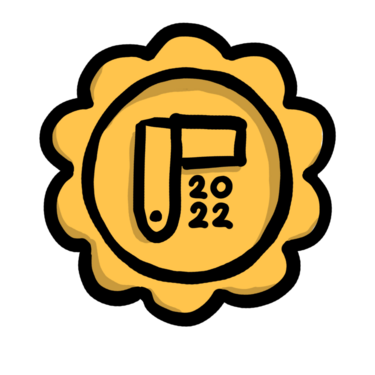 Conquest of Helios is a petit strategy game for the Panic Playdate handheld in the vein of grand strategy games from the NES and Gameboy era. Build your army towards the ultimate goal of ruling the entire continent of Helios. Think of Risk but with a bit more complexity.

Conquest of Helios features a single manual save file, and definitions of game mechanics are provided in the Help menu.

There are two ways you can play Conquest of Helios.

In order to download this game you must purchase it at or above the minimum price of $3.50 USD. You will get access to the following files:

Is saving a game actually supported? I've not yet been able to exit the game and return and continue on. At first I assumed it would auto-save on exit, and that the "Continue" option on the home screen would restore the game, but that doesn't seem to work. Then I found the System menu with its "save/load" options, but those don't seem to work either?

Yes, saving is supported. There is no auto-save, you need to go to System->Save; then if you exit your game you will be able to Continue from where you left off.

Ah, so you have to explicitly choose the Exit command after doing the Save command?

Oh, I  just mean once you choose "Save game" from the menu, you'll see "Current game state saved." come up in a dialogue window. Press A or B, then when you're back at the map again you can do whatever you want at that point, including Home screen to exit the game (or the exit game menu option if you so choose).

Hi. Sorry but I cant find the save Button :(

Where is It exactly? If I press the yellow button on the top right of the playdate I get the options "volumen", "home" and "screenshot". It's supposed to be there or elsewhere?

I LOVE the Game by the way. Thank you!

When at the main menu on the left, press the left or right on the d-pad to access another menu of items: Skip Turn, Help, and System. 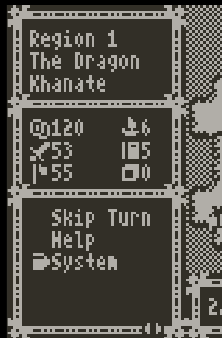 Choose "System", then choose "Save Game". After it says "Game is saved.", press A or B one more time to return to the menu. At that point it should be safe to completely exit the game with the Playdate home button.

I love the tracks in this game! Would the composer happened to have been inspired by the Celeste OST? I totally got those vibes

Celeste is pretty cool, but I don't think we remember how that OST sounded anymore. But appreciate the compliment! :D

Finally figured it out I think, and enjoying it quite a bit so far.

When the enemy declares war on you, they only do so when they are guaranteed to win. And they will usually demand tribute from you first. So you have a pretty good buffer before they will attack, and a season to prepare if they warn you. If they take over all of your lands, then it’s game over.

I see, they only declared war on one of my lands but the game ended, could that be a bug?

It could be. But I would need more info on your circumstances in order to recreate it. There was a bug with that in version 1.0 but it has since been fixed and I haven’t been able to recreate it anymore. You could also be the subject of 2 wars in one season and just didn’t notice the additional message was about your lands.

Are there instructions on how to play anywhere? I feel completely lost. Thanks!

Not really. It's one of those "Learn by playing" kind of situations. : D
But, if you have any gameplay questions, feel free to ask.

Hi ! Would you be interested in a coop-bundle regrouping the best selling strategy games on itch at the moment ? Have a great day.

the playdate has sideloading

Question for those still waiting on their playdate: when you push patches, is it safe to assume that playdate players will need to sideload a second time? No OTA updates for sideloaded games?

If so, will your saves carry over? (assuming this game has saves)

If you already have the game sideloaded and there's an update, you will need to download it from wherever you got it (such as here at itch) and then sideload it again. No OTA like with season games. However, you could download it with your phone/PC, upload it to your Playdate account, at which point your Playdate will eventually get a notification for an update and download.

Saves carrying over is dependent on the developer. I try to make all saves backwards compatible so you don't lose any progress after an update, and this includes Conquest of Helios.

Oh snap! Thanks for catching that!

It happens with a bunch of menu options, like Ally, War, ...

Sometimes I can't even select a new action, it'll keep trying to ally when I want to move troops, etc.

Are you using v1.12? Because that is the version that the Demand Tribute bug was fixed. I'm not able to replicate the issues you are describing. If you can provide more information or a save file with this bug, that could help a lot in isolating the cause.

Pretty sure I am, says 1.12 in the corner. I don't know if it persists past saving. I just reproduced it by starting a new game on easy mode with the first faction. Select Diplomacy -> Treaty, cancel with B, select View. You're now in "Ally with who" mode, have your own territory selected and if you go through the territories you cannot select your own again.

Thanks for these specific steps. I was able to reproduce it and I'll put out a fix this evening.

Thanks a lot Dexter's Lab :D

One of the best Playdate games to date. Great replayability, easy/hard mode, doesn't hold your hand.

Great game. Must own for the Playdate.

Thanks TMAT!  Very much appreciated.

This game is awesome! Reminds me of Castles II: Siege & Conquest I used to play on the Macintosh back in the day.

I had a treaty with another kingdom in 'easy' mode, and they still took over one of my two domains. Is that normal?

Thanks! Castles II: Siege & Conquest? I never heard of this one. I'm going to have to go look that one up!

Regarding treaty with another kingdom, they should not be attacking any of your lands while the treaty is still active.
Are you sure the treaty didn't expire, or that a different computer attacked and then your ally attacked the computer? Just double-checking the conditions. I will look into it though and push out an update if I can replicate it.

Ohhhh I forgot about the duration -- I bet the year had rolled over and the treaty expired.

This game is super cool. Can't wait to spend more time with it!

Turns out you were right. I was able to replicate this issue! :(

I have a planned update to release today that has some minor gameplay additions. I will include a bug fix for this before I push the update.

Thanks for reporting it!

Small bug though, when a game is loaded and the music was set to off, the title music continues to play. This is remedied by toggling the music on, then off again.

Thanks for catching this! I'll note it for the next inevitable bug fix update. :D

Is there an intro somewhere to get you going with the basics?

Unfortunately no, it's kind of meant to be one of those "figure things out as you go" situations. Although if you press Right, there's a Help menu with some definitions of gameplay.

But if you have any questions on the game mechanics, feel free to ask.